A lovely day in the archipelago with trout in sight

In this story a great day in the archipelago with trout in sight we follow Fredrik Winter on a trip with friends.

Finally some own fishing, no job, no guidance without his fishing buddies. Sure, it's a little guided tour of his friends, but the difference is that I can fish itself and not just service.

The prospects looked promising, partly cloudy to mostly sunny, 5 degrees in the water. The downside was probably the northern wind, 5-11m / s was promised.

We packed equipment and lunch in my little hyttbåt when the big boat was a little small fix to go before the launch of this season and took off, with heat in the cab to go there's no need of one, but it was soon shut down due. of clothing election this windy day.

First stop was a large island in the immediate area where I know there is nice fish are following the herring in and then emphasizes the edges. We began to erode, operation after operation, we threw ourselves around the island without result, Småvik pengarna with 0,2 degrees warmer water were empty and the hope sank. But it was wonderful to be outside and enjoy.

We went outside the archipelago fished all windswept bays, leeward edges and headlands without result. We changed the open edges and bays to a little more protected area, but still could not find anything life. In the shelter behind a rock had coffee and äggmacka to gather new strength. The tactics changed, and I steered the boat toward the outer islands where the wind whipped the hardest. Outside a small lagoon where the wind blew, we began to erode over the seaweed belt and just at the mouth of the lagoon, I saw something that glistened behind the move, YES finally some life. We drove over the stone edge and into the lagoon, grazed by each seaweed shake, but not until we come right into the lagoon, I have a follower into the boat.

I put the boat behind the little bit that gives us quite calm water and a full degree warmer water. The anchor go in and we begin methodically fish in the little lagoon. It will not be long before it slams, a distinct blows and the fight begins. After an undramatic twirling and fine netting that is that, a blank trout .... Or no, there are no trout. A salmon in a shallow bay, amazing. It certainly does not to the standard of the steps of a salmon inside a bay, not for me anyway. 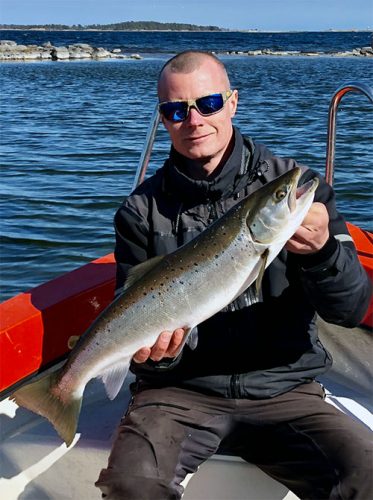 Fredrik Winter with a beautiful salmon.

But the day is not over and the area seems to hold good with bait fish and a higher temperature than other parts of the archipelago that we tried. So we remain in the same place with the hope that there is a bay that is in those specific circumstances, means that the fish passes again and again in search for food. Entirely correct, it takes no more than 10 minutes until it once again cuts on my rod, it bows deeply and roll begins to creak. This time it is the nice trout sliding into the net, Luck is total.

Happiness is complete with this beautiful trout.

Salmon and trout on the same trip, beautiful. It resulted in a needed coffee break before we proceeded to fish. The bay provides a stab at but it results in a lost fish. The time does not wait, and before it begins to obscure we turn the bow back home and return to the mundane.
fishing, lovely weather and good company where you can also add fish, it becomes a really lovely day in the archipelago.
Penned: A lovely day in the archipelago with trout in sight, Fredrik Winter.