The fish story "Fishing trip in Adolfström" says Per-Anders Hamberg about a trip he made with his two sons in Arjeplog mountains. Squalls pushed our little boat inexorably against the sharp rocks. Not the strokes had failed we would not run the risk of capsizing and sucked against jokkens powerful outflow from the mountain lake. Then suddenly something happened that did not happen ....

It actually started soon 40 years ago. My father commanded us boys on a fishing trip to Arjeplog mountains. The trip and the nice memories have followed me over the years. So somehow it seemed natural that I took with my boys on a similar adventure, while I was very excited if I would recognize nature as I remember it. Winter and spring I devoted to preparing the trip. Fly Tying, purchase of equipment, caste course in fly us three, booking transport and accommodation, etc..

It was, as everybody knows, the hottest summer on record. How would that affect fishing in the mountains? Reports from Adolfström blog said, however, that the fishing was good despite the occasional tropical heat. We agreed that we would rather have it nice and warm than cold and wet. And who would not want it? The ride went through Junsele, Åsele, Wilhelmina and Sorsele. We passed many rivers with extremely low water level so I was a little worried about how it would look in the stream, we would fish in. 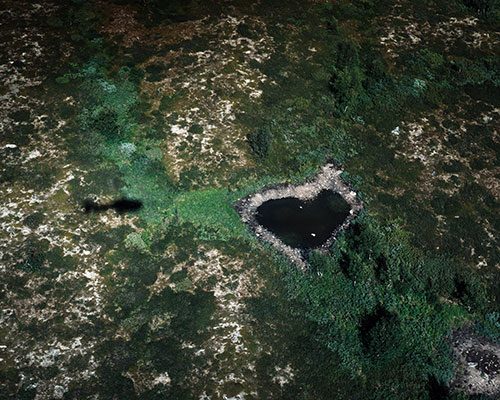 The sight of Gavvasjaure from helicopter.

The helicopter took us quickly up to the mountain lake, Gavvasjaure, where we rented our cabin. Nice not having to sleep in a tent. While I packed up the boys rowed, Alexander and Christopher, to a cottage a little further away to get an outboard we borrowed. Christopher shone like the sun when they came back. New pers trout. Promised well for the future. In the evening we fished in the upper part of the stream. P.g.a low water, it was very difficult fished, most trout in the smaller sizes jumped. As it approached midnight got Alexander still a beautiful trout of just over half a kilo. The food patched. Fried and was enjoyed right away when we arrived at the cottage. 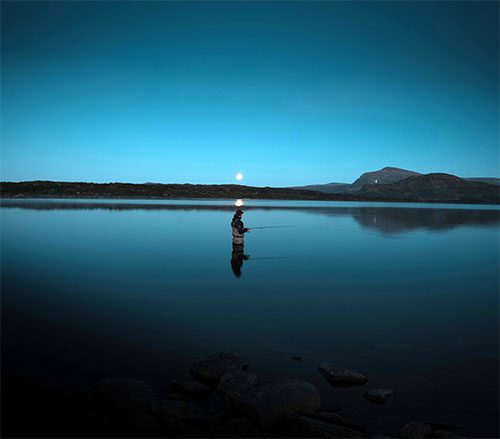 Day two began on the lake. Långedrag with spin'n glo worked great. We found no big fish but the more, most char. Once again, Christopher shine catch up with the sun as he never caught this beautiful fish. Sometimes we stayed up and threw the wake of dynamite in varying color and was thus up some trout. We practiced "catch and release" when it was too hot to save the fish a few hours it was time to eat. The water temperature meant that we had to ensure that the fish recovered well before they were released from the oceans. There was no question that we would fish all day and night so we felt we did not need to keep any. And so it became, or….?

To get to the lake with the "big fish", the landlord told me about, we had to pass jokkens outlet in the lake and we did with the rowboat. We pulled up on the beach a few hundred meters after the stream and prepared us for a half hour hike to the trout pond. It was an easy climb and when we got further into the ground, we could say that we probably would not clear us from the rain approaching from the mountains south of us. The rain drew in but it was quite easy as we continued toward the goal. Ten minutes before we were to arrive, and we were on the hike's highest point, hit rain and thunderstorm us with such strength that we decided to take us back home without having fished. 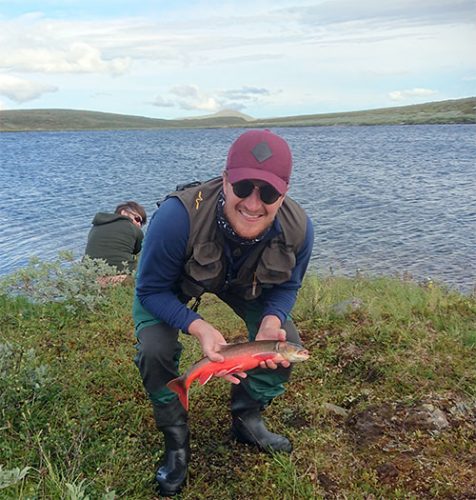 Christopher with a char from Rijbas.

We headed for the stream to possibly find a Ford because we wanted to avoid taking the boat in the storm. But such a thing, we did not, so I had to head to the boat. Wet and stressed we reached it eventually. Then, when we just shot it out, the storm struck with full force. The wind and the waves pushed us against the rocks that lined the beach to the stream. I shrugged and pulled the starter cord on the outboard only coughed and stopped.

- "You need to rest guys!”, I shouted with a hint of panic in her voice. Both sons took so cracked oars. The storm took us right in the side and the boat lurched from left to right all the time, oars was one moment deep in the water for the next whisk ineffective in the air. Just as we have taken us past the most threatening stones outside the stream scraped it to the hull and we had to halt. We had rowed due, a rock formation just below the surface, the boat heeled over more and more and I quickly assessed the ability to take us ashore if we would capsize, drygt 20 meters to the beach, tailwind and hopefully soon shallow, it may go well. When we just waited for the next wave would roll over us, we wiggled loose. Full speed ahead.

-"We must find a way to take us ashore, we can not stand quiet for much longer!"Alex burst frustrated. The opportunity presented itself shortly. Behind a rock promontory we found little shelter where we, with great relief, could pull the boat to continue on foot. Dripping but elated to have managed unscathed we plowed through the willow bushes. It was not long before I got caught with a boot in a shrub and slowly, of tail heavy backpack, let me rygg in ual, kicking as a turtle. - "Dad, stop filming as Neymar!"Mocked became one of the youngest son, indeed. We tanned large. It was freeze-dried to dinner that night.

3:e day. The forecast from yr.no were promising. Some light rain in the morning would be followed by partly cloudy. We got up before lunch, ca 45 minute walk with 180 meter rise up to Ribasåive, a mountain 911 meters above sea. Below is spreading Ribasjaure tempting, and the fund rules the majestic Svaipa. Alex has rigged his camera for some great photos when the first drops of rain fall. Suddenly, you hear a crackling and crunching sounds from Kristofer kolfiberspö, thunder announcing its arrival. We throw away from us all the rods and put us near a boulder to take shelter from the rain which is now seriously trying to drown us. We realize that we can not stand without the need to seek better protection for most considering Alexander's precious camera equipment. I peek around in the pouring rain and sees a cavity in a rock where he can put away your backpack with camera. The thunder is far above us now. it slams, lightning and rain whips over the mountain. A completely different and somewhat frightening experience to meet the forces of nature so high up in the terrain.

Eventually, when we got some respite from the storm, we decide to take us back to the cabin to warm us with some food and change into dry clothes. Sagt och gjort. Once warm and dry, we choose to hike back up the mountain and lake. Which we will not regret! The weather is now good again. Arriving at the lake ranges we set up a tarp, in case.

Fishing is brilliant. Direct Kristofer get a little char and it is not long before Alexander calling for assistance with the landing net. The most beautiful trout I've seen fall into the mesh and photographed and admired before it becomes a delicate sashimi with soy sauce and wasabi on the shore. Reds dominate, clearly, in the lake. An occasional trout landed well but char are many more. Great to see them swim after the move into the clear water with their splayed pectoral fins with white edges and the orange-red belly flames when they turn.

The fourth day is also the last full before the return trip. The morning greets us with beautiful weather. The boys rowed out a boat trip and I try some fly fishing we have a pelvic outlet. The trout are on the ball and I manage to hook a few minor. We eat an early dinner, fried char with broth cooked instant noodles and fried onions.

When the night is young, we go down to that part of the stream I'm already familiar with. I note that most of it is as I remember it. rapids, harness and neck at the location of tent 40 years ago. A proud father sees his sons to stand in the same place as I did myself. They handle their fly rods they done nothing despite being a beginner. And they get fish. Nothing goes well compared to his first trout on dry flies?

As it approached midnight crept temperature down considerably while sjöröken formed and the full moon rose over the mountains. The sight you never forget. The summer goes well to the story, for their persistent tropical heat, and above all for the many extensive forest fires that hit much of the country. Our pilot David, who brought us down from the mountain, got the phone call from the manager when he just returned home to the West Coast for some much needed holiday. 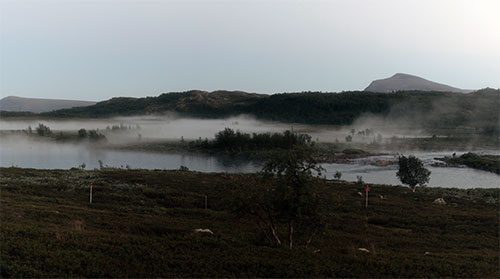 "You have to come up again right away. We need you to cover up for our competent helicopter pilot to assist in water bombing forest fires ". So even though he has not worked directly with the fires self, he still a great effort that others could carry out their mission. How many of these everyday heroes, there is that one may not think of?

When we summarize our experiences are the most hardships and thunder we think of. How quickly the weather changes in the mountains and how prepared you have to be. Meanwhile, we are pleased that we decided to cancel the excursions and put safety first. The fishing was obviously fantastic, even if the fish was not so great. But quality was the unbeatable. Then you also have to consider how climate change will affect fisheries in the future. As it was now, it was probably too hot in the water, especially for char. Where it all a one-off? We will return again and we will see